NBIA scientists Markus Ahlers, Mohamed Rameez, Subir Sarkar and Jason Koskinen and their colleagues in the IceCube collaboration have just published a careful study of neutrino interaction cross sections at very high energies using, in effect, the core of the earth itself as a target. The paper, which appears in Nature this week (click here to see the article online, doi:10.1038/nature24459) provides the neutrino-matter cross sections at energies that have never been reached by particle accelerator experiments. The measurements, and the subsequent analysis, use the fact that neutrinos that should reach the IceCube detector from "below" (having passed through the core of the earth) are partly depleted due to their interactions with matter inside the earth. The result is within error consistent with predictions from the Standard Model of particle physics, and thus put new and more stringent bounds on theories and models that go beyond the Standard Model at higher energies. The analysis has been based heavily on work done by former NBIA scientist Philipp Mertsch along with Subir Sarkar and Amanda Cooper-Sarkar using data from the HERA-accelerator in Hamburg. 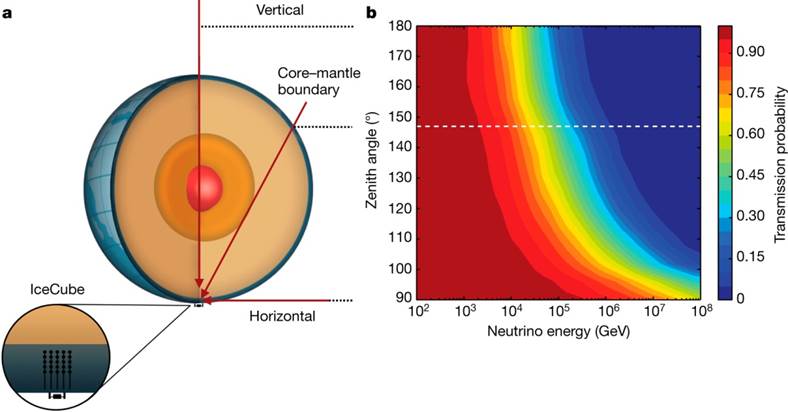 a. Neutrino absorption is observed by measuring how the neutrino energy spectrum changes with the zenith angle. High-energy neutrinos transiting deep through the Earth are absorbed, whereas low-energy neutrinos are not. Neutrinos from just below the horizon provide a nearly absorption-free baseline at all relevant energies. b. Standard model prediction for the transmission probability of neutrinos through the Earth as a function of energy and zenith angle. Neutral-current interactions, which occur about 1/3 of the time, are included. When a neutral-current interaction occurs, a neutrino is replaced with one of lower energy. The horizontal white dotted line shows the trajectory (and zenith angle) of a neutrino that just passes through the core–mantle boundary.